Home » The Comeback of Caroline Buchanan against All Odds

The Comeback of Caroline Buchanan against All Odds

Caroline Buchana has won the BMX and Mountain Bike eight times and became an Olympian twice. The athlete has been able to carve a prosperous career that she never thought would reach this far. She said to Wide World of Sports that she will have a plate with twelve screws for her entire life. The plate is kind of like an X shape that keeps her sternum in tack. There are also two-wire cables that hold her chest together. In 2017, Caroline Buchana was involved in a horrible accident. The car turned over and its weight landed on her body which caused her horrific scars.

Her whole body suffered severe injuries but her chest was the most damaged. She explained that she pierced her lungs and her heart wall lining, including a broken nose, sternum and internal bleeding.  She went on to express how the ordeal was a huge reality check about how delicate our bodies are and what it can endure. Her sternum was weak and she experienced extreme pain. In the past, she would break her bones and heal within six to eight weeks. This didn’t stop her from doing what she was required. The fractured sternum limited her ability to do anything she wanted.

With three surgeries done to repair her sternum, there was still a long way to go for the athlete after the incident. Two months past but she was not able to drive and daily routines became a mission. 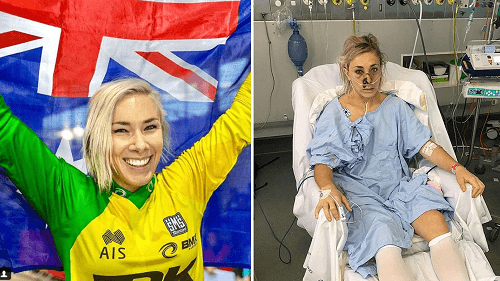 It would be understandable for Caroline Buchana to take a break from her career to recover. Unlike what most people would do, she never gave up. She had to make sure that her body was entirely healed and the several surgeries in between. Two years later, Caroline Buchana is still focused on her healing journey and qualifying for the 2020 Olympic Games.

Buchana views the body as phenomenal. It can recover and heal. She had the right medical assistance and has undergone a third surgery after three plates in her chest. With two wires cables and twenty-six bolts between two cardiothoracic surgeons, they have fixed her chest. She had enough time to rest. She said she can’t imagine how her body will be when she turns sixty recounting the injuries that her body has been through.

Sadly, there are mental issues that she has to deal with. Simple pats on the back after achieving something at rehab helped her pull through. This is how she was finally able to get back on track. The daily walks that she would do gave her the peace of mind she needed.

Caroline Buchana watched other athletes make rankings for two years. A couple of weeks ago she got back into racing and came in the fifth position after the dual slalom at the US Open of Mountain Biking. The remarkable athlete admits that she has side effects. The metal and hardware that she has in her chest feels different. There are a few things that she does to be able to perform and hopefully win an Olympic medal. Although she can get on the bike, the journey to achieving her goal has tested her patience.

October until November she will be traveling from Indonesia to Tokyo, then Switzerland, return to Indonesia go to Australian and returns to Indonesia. This will help get her points up and allow her to move up ranks.  The incident gave her focus and the motivation to succussed against all odds. Caroline Buchana has a lot of work ahead of Tokoyo 2020 but she is well on her way.